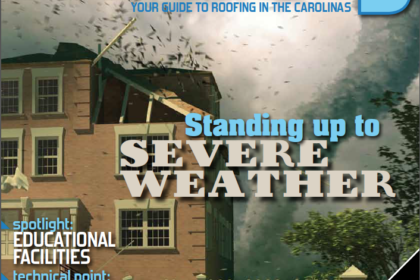 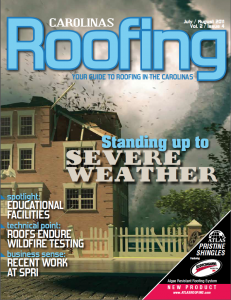 We are now in the21st century, and granddad’s barn has been gone since the middle 1980s. But I think we can still capture the magic of that old roof today. It is possible to recreate the simplicity and efficiency of that sloped metal roof for our public buildings, especially our public schools. Let’s look at a few examples of how sloped metal roofs were successfully used in the school retrofit market— not only keeping out rain and snow but holding tight during high-wind events.

North Windy Ridge Elementary School
North Windy Ridge Elementary School is located in Buncombe County. When the school was built, a metal roof was specified. Unfortunately, the roofing process was not completed properly—shop drawings were not followed—and the metal roof had persistent leaks. After a lawsuit was filed against the original roofing contractor in 2008, the school board hired an engineer to produce a set of engineering plans and specifications necessary to re-cover the original 100,000-square-foot metal roof with a new metal roof. Dick Canon with Canon Consulting & Engineering, Moore, S.C., prepared a set of bid documents that utilized a structural framing member from Odessa, Fla.-based Roof Hugger Inc. placed directly over the existing metal roof. The new metal panel system attached to this framing system was supplied by MBCI, Houston. The cavity between the two roofs was adequately ventilated to eliminate the possibility of condensation within this space. After being constructed per the contract documents and being monitored for conformance with these documents throughout the project, the owner had the metal roof it had originally expected. This retrofit metal roof has been leak-free during the turbulent winds and excessive snow loads experienced by all roofs in mountainous regions since its installation in 2009. 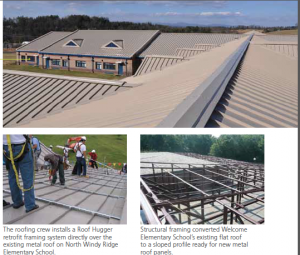 North Lincoln High School
A project similar to the North Windy Ridge project was bid and completed in 2010 for the North Lincoln High School facility, Lincoln County, N.C. The original metal roof had not been installed per shop drawings and had faulty workmanship. Instead of abandoning the use of a metal roof, the owner hired Canon Consulting & Engineering to provide a set of contract documents necessary for bidding. Again, Dick Canon specified a Roof Hugger structural system placed directly over the existing metal roof as a substrate for a new standing-seam metal
roof system from MBCI. Darrell Gettys, North Lincoln High School’s maintenance director, reported at the November 2010 board meeting that the school finally had the metal roof it originally anticipated: The 221,000-square-foot facility has experienced no leaks since it was installed more than one year ago. The strong winds spawned from severe thunderstorms and sporadic tornadoes seen in the spring of 2011 swirled by this facility with no damage to the new structural retrofit metal roof. I should note there was nothing wrong with the original design, contract documents or materials for these projects that would have required replacing the original panels. Unfortunately, in both cases the culprit was lack of attention to the installation details and procedures. Like all other roof systems, a proper design must be matched with proper installation and inspections throughout the project.

Davidson County Schools
In spring 2010, Davidson County Schools received bids for its 19th, 20th and 21st metal retrofit roofs. These three roofs total more than 135,000 square feet. The school system’s first metal retrofit roof was installed in 1989, and more than 1 million square feet of retrofit metal roofs have been installed since then. All except two of these roofs have utilized a lightgauge framing system that created a minimum of 1/2:12 slope over an existing flat roof. The three projects bid together in 2010 were for Midway Elementary School, Lexington, N.C.; Welcome Elementary School, Lexington; and Stoner-Thomas Elementary School, Lexington, and were engineered by Bilger Engineering, Raleigh, N.C. The roofing contractor was LaFave’s Construction Co. Inc., Landis, N.C. LaFave’s Construction has performed the majority of the retrofit work for Davidson County Schools since 2004. With the retrofit framing and roofing approach, a flat roof with a top membrane that had deteriorated with exposure to the exterior elements is replaced with a metal roof panel that is expected to last more than 45 years. In addition, because the metal roof requires positive drainage created by the sloped sub-framing, any water on the roof immediately is forced off of the roof at perimeters. Davidson County now has three more retrofit metal roofs that will provide the same structural resistance to wind loads and weather barrier to the elements. Like my granddad’s barn, water off of the roof can’t get into the hay. 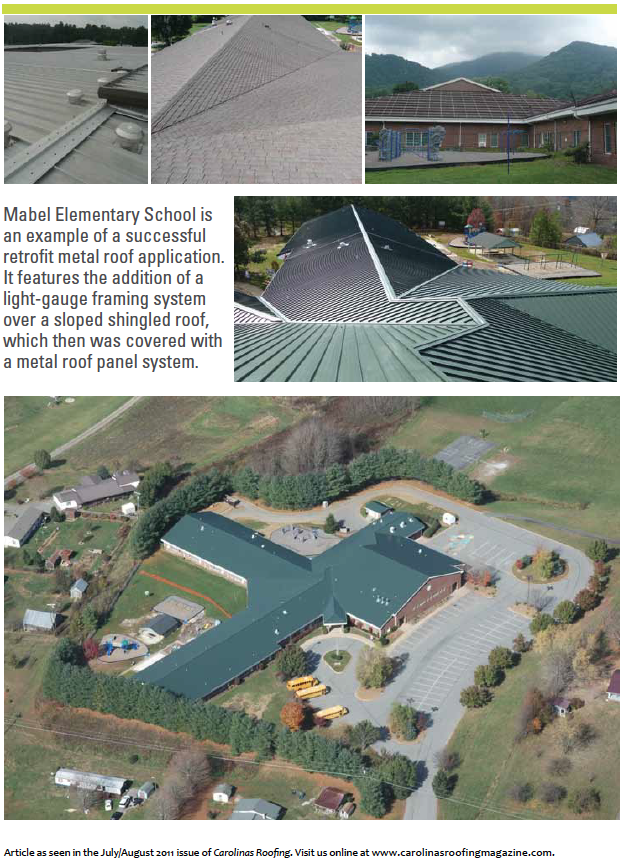 The final example of a successful retrofit metal roof application is the addition of a light-gauge framing system over a sloped shingled roof, which then was covered with a metal roof panel system. This approach was used for Mabel Elementary School, Watauga County, N.C. At this school, shingles were installed when the building was built, approximately 18 years earlier. The 54,000-square-foot roof had multiple intersections, hips, valleys and ridges that made it difficult to get the shingles to seal. In addition, the school sits on top of one of the highest areas of the Appalachian Mountains and receives significant snow starting in late October and lasting until early April each year. These factors had caused the shingled roof system to leak for most of the years of its existence. Attaching a 4-inch steel purlin system directly to the existing roof joists created an acceptable platform for a standing seam metal roof to be installed. An additional 6 inches of unfaced fiberglass insulation was placed between the two roofs adding an R-value of 19 to the existing roof’s R-value. The design work was performed by Metal Roof Consultants Inc., Cary, N.C., with contracting work completed by Lafave’s Construction. Work was finished in late October 2010, and the first snowfall occurred a few days later. The roof resisted the onslaught of several feet of snow and the spring thaw without a leak for the first time since the school was constructed. It hopefully did not put the kids to but it sure kept the “hay” dry!

Retrofit Simplicity
Although retrofit metal roofing may sound complicated, it is based on simple concepts which can yield a roof that will last as long as the brick in the walls and the concrete in the floors. This simplicity allows the engineer to be able to depend on structurally sound information concerning wind loading and live loading, as well as code and industry accepted metal roof systems’ structural capacities, on which
to base the design. In addition there are time-tested installation principles on which the professional contractor can depend. When put together to satisfy a school’s need to replace an existing roof, they can create a roof with a low life-cycle cost. My granddad had an eighth-grade education but he understood the benefits associated with a sloped metal roof and built his barn using this type of roof more than 90 years ago. The same basic principles—creating slope to get the water off the roof and using a metal roof material that will last many years—are used today to satisfy the needs of our public school systems throughout the country and especially in the Carolinas. I wonder whether granddad knew that what he determined to be the best roofing choice to keep his hay dry would be used extensively by school districts to do the same for our next generation.

Chuck Howard is president of Metal Roof Consultants Inc., Cary, N.C., and a member of Carolinas Roofing’s editorial advisory board. Licensed as a professional engineer in 12 states, he has provided his services to design, construct, consult or defend metal roofs in the field or in the courtroom. He can be reached at chuck@metalroofconsultants.net, www.metalroofconsultants.net or (919) 465-1782. 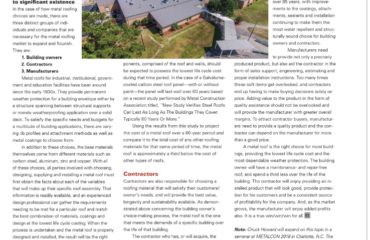 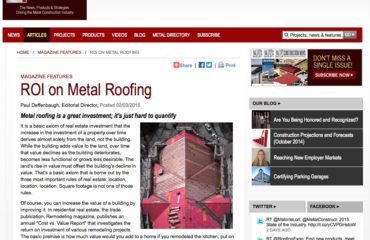 Metal Roofing Is a Great Investment

Part 2: The Business of Metal Roofing Contractors- Protect Your Business